The world is in the midst of massive changes.  We have the pandemic, environmental damage, political polarization, and climate change.  In the midst of all this, what are the possibilities of change for us as a people of faith and as individuals?  We will explore this idea of change this Sunday. The service will be in person and online. 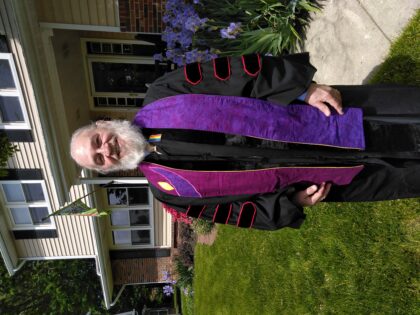 The Reverend Doctor Richard Speck is the retired District Executive for the Joseph Priestley District (JPD) of the Unitarian Universalist Association of Congregations.  He was named Minister Emeritus in 2019.  Previously, he served nine years as minister to the Unitarian Universalist Fellowship of Vero Beach, FL, before coming to the JPD in 2000 as Acting District Executive.  In his last two years in Florida he also served as the music director for the church.  He graduated from Meadville/Lombard Theological School with a Doctorate in Ministry in 1990.  He was hired as the regular District Executive in 2001.  He served fourteen years as DE before retiring from full time ministry in 2014.

Richard continues to be active in social justice programs like the Black Lives Matters and The Coalition to Dismantle the New Jim Crow in Delaware.  He conducts weddings, memorial services, and funerals and continues preaching in area congregations.  He has served as Treasurer of the UU Ministers Association twice, finishing his second three-year term in 2020.  He is currently treasurer of the UU Retired Ministers and Partners Association.  He also has served as Treasurer for the Priestley Kingsbury UUMA for the last five years.

Richard became a Unitarian Universalist as a layperson in Springfield, IL, in 1974.  He was an active lay member of the Unitarian Universalist Church of Birmingham, AL, before going into the ministry.  In that congregation he held a variety of leadership positions (vice president, secretary, canvasser, choir member, lay delegate) and was active in the social life of the church.

Richard’s career before the ministry was as a respiratory therapist for eighteen years.  The last ten years before seminary were spent in Birmingham as the director of a respiratory care department in a large hospital where he supervised over 30 people in multiple divisions of the department.  He earned a MA in health care administration in 1976 as part of this career.  He left health care to pursue new avenues of serving humanity through the ministry.

He is married to Janet Tillman and resides in Wilmington, DE.  He enjoys making music, flying his own airplane, and creating stained glass art.  Janet and Richard have two cats.