UUFE’s Laura Winne tells about growing up in conservative southern California and Saudi Arabia, her craving for the color green, and her most remarkable thing – fueled by caffeine.  Still giddy about New Hampshire.

Laura:  I grew up primarily in Southern California, the city of Orange located in Orange County. This is a notoriously conservative region of southern California and also quite charming in many ways. We also lived overseas in the Middle East, Saudi Arabia to be exact. This was due to my father’s work with Flour Corporation, which at the time was busy constructing and maintaining a number of oil refineries for the Saudi government. To say that life there was “interesting” would be an understatement. Sand storms, extraordinary heat, all the expatriate females having to abide by Saudi’s version of Sharia law, which included women not being able to drive, dress codes, etc.

When we returned from Saudi, my hunger for the color green could not be satiated. Still true today. Living in southern California, which is also a desert, didn’t help that green craving at all. I left California at 18 for the East Coast and never looked back. Plenty of green here! 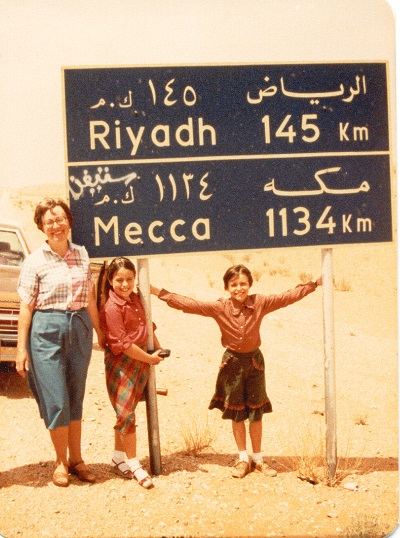 I was raised by devoted and loving parents in the Methodist tradition. During my childhood and teenage years I was exposed to international travel and a great deal of cultural diversity. My parents instilled in me a love for diversity and a deep appreciation for the arts and the importance of life long friendships.

Were you able connect with Saudi girls, women, and families while you lived there?

I would have to say that we did make connections, but mostly it was via business transactions, like when purchasing oriental carpets and being invited to the home of the merchant to have dinner with his family. That was special. Mostly our connecting involved a lot “tea drinking” with merchants or business folk connected with my father’s work.  Most of the people we interacted with were expatriates like ourselves, living in our compound or a neighboring compound, folks my Dad worked with, or friends we had made via Sunday worship.

Did you feel the impact of Orange County conservatism while you were growing up there?  Or did you only become aware of it in retrospect?

Feel the effects of conservatism growing up?  No. We lived in a very culturally diverse neighborhood.  Although the political beliefs were conservative, we were not aware of experiencing any ripple effect as children. Our home, however, was used as a polling station during the Reagan/Carter years and my folks did really like Reagan for a bit. Now, I’m pleased to say, they are huge Bernie/Hillary fans.

For the past twenty years I have worked as a Reading and Language Arts teacher for middle school students on Long Island, Baltimore City, and in Queen Anne’s County. Prior to teaching, I worked in New York at a homeless shelter for teenage runaways,  and as a social work counselor in a group home for pregnant teen moms. I also worked with two agencies in New York as a counselor, providing direct care to the developmentally disabled, and I worked in N.Carolina at a charter school,

The most remarkable thing I’ve accomplished in my life was to achieve my Master’s degree in two years  while working full time and also doing a full time teaching internship. To this day, I’m still not entirely sure how I managed it all. Lots of caffeine!!!

This one’s easy! Weight loss. As the years go by, the pounds have attached themselves to my body. NOT happy with that at all. This is the year of change!

At Joys & Concerns recently, you and Liz were giddy about your NH summer vacation.  Are you winter skiers, too?

We are still “giddy from New Hampshire”. That vacation did wonders for our soul. So pleased we now will have the ability to visit every summer. We’re not skiers, but we greatly appreciate unspoiled, natural areas, and I like to hike.

I came across UU while living in New York. I heard about UU as an interfaith fellowship and was intrigued by the idea of multiple faiths worshipping in one space. After I visited The Stony Brook UU, I was hooked.

During my time at UUFE I have served for almost 12 years on the Worship Committee, I have been a greeter and an usher, a religious education teacher for youth, and for a brief time, a member of the RE committee. For the next two years, I will be serving on COCM. My choice to serve the UUFE community reflects the importance of serving any community that is valued. UUFE has provided me with spiritual inspiration, support, growth, and some of the best friends I’ve ever known. It is only natural to want to give back to a community that has given me so much.