UUFE members met on Earth Day weekend to celebrate the beautiful natural surroundings of our sanctuary, to tidy up the Nature Trail, and to enjoy bratwurst and brew around the campfire.

UU liFE was there to witness the deputizing of the first Marshall Trail Rangers and to hear them spin a few tales.

Gayle Scroggs: I finally explored the trail for the first time this April—after being a UUFE member for over two years.  I was awestruck by the serenity of this natural sanctuary right outside our door, and wanted to make the trail more accessible for all.  I also like campfires and roasted hot dogs!

Maureen Curtin:  I’d much rather tidy up the outdoors than the inside of my house! 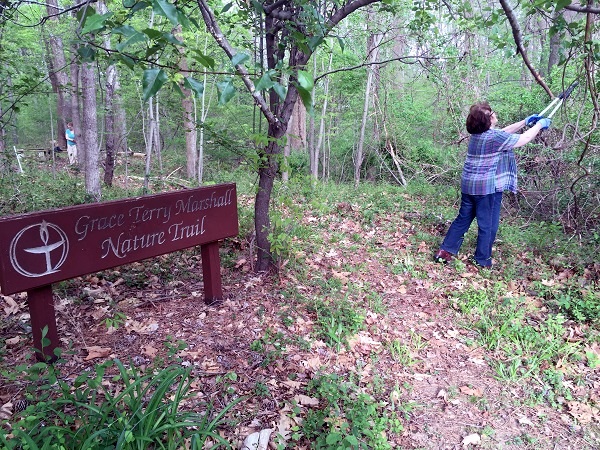 Don Barker:  I had walked the trail down to the stream only a few times in the past few years.  And I had talked with Jim Richardson a few months ago about his early work on the sign and a brochure that describes fauna in the woods and stream habitat.  So, it’s been on my mind.  What really spurred me to take part on Earth Day weekend was this:  Rita and I were weeding the garden beds on the back side of the building, and out from the woods appeared a woman in rapturous contemplation of the natural beauty around her.  It was Gayle, and we talked about the trail, and Earth Day, and The Seventies.  And we decided to join up with the Rangers. 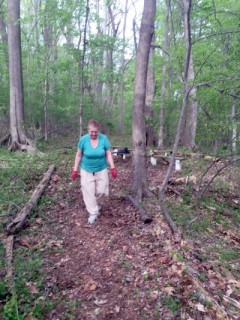 UU liFE:  What do you find appealing about our UUFE Nature Trail?

Gayle: The scenic trail leads through hardwoods and wildflowers to a winding stream that seems to be the headwaters of the Tred Avon. Whether walking or just sitting and contemplating the view, it’s a wonderful experience to remind us of our seventh principle!

Maureen:   The trees with their different barks, the smell of fresh earth, and the quiet…broken by the bird cries and the breeze rustling through the branches. Being part of a team doing something to honor our Nature Trail on Earth Day.

Don:  The steam bottomland is beautiful, of course.  But what’s most interesting to me is the abrupt transition from the upper to lower reaches.  And how the trail pioneers took time to design and build the platform, stairs, and walkway to cross from one to the other.  The micro-amphiteater is quaint, too.  I imagine forest elves performing there when we’re not around. 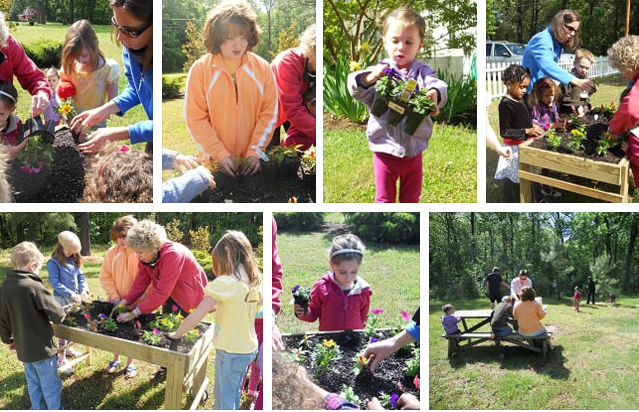 UU liFE:  What future do you see for our Trail?

Gayle: Good question.  How are others already enjoying it?  I can see groups meeting there for discussion, contemplation, and song.  Individuals might want to take stroll before or after any event they are attending.  I hope the Soul Matters Inner Circle will met in “the garden” soon and walk down the trail to the micro-amphitheater.

Maureen:  I would like for the choir to sing there.  For ourselves or for a small service. 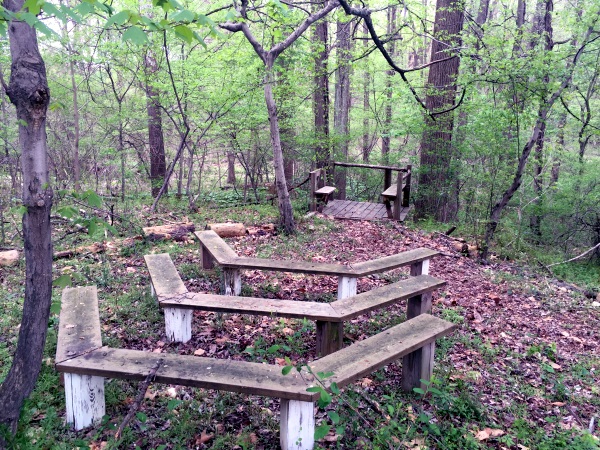 Don:  I hope this first Earth Day event and the “Rangers” idea will become a tradition that draws more UUFE members and friends to the trail.  And draws me back more often, too.  Maybe at the next annual event, we can say and hear more to honor our trail’s benefactor, too – Grace Marshall.  S’mores at the next Marshall Trail Rangers Campfire would be fun, too. 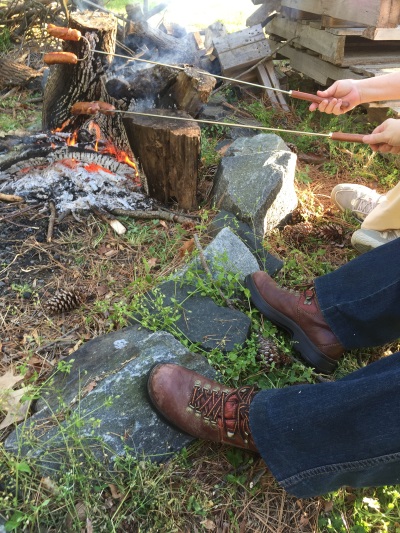