UUFE’s Jack Harrald answers the Five Big Questions and talks about Scandinavian pride, a Norwegian tramp steamer, tall ships and camels, baseball tours with his grandson, and how the Next Big Thing got handed to him.

UU liFE: Where were you raised, and how?

Jack:  I was raised in Southbridge, Massachusetts, a small New England company town.  The company was the American Optical Company, where my father was employed for over 30 years as an engineer and manager.  My mother, as was the custom of the day, was a stay at home mom until she returned to teaching when I reached high school.  My older brother and I were raised under what seemed to be ideal conditions.  It wasn’t until much later in life that I realized that my mother battled severe depression, and I came to understand the impact that this had on me and on our family system.

All four of my grandparents had emigrated from, and my grandfather was a Swedish Covenant minister.   The Swedish ethnic pride (arrogance?) was very strong in the extended family system, providing a cultural context for family gatherings and holidays.

My grandfather had been the Director of the Scandinavian Sailors and Immigrants Home in Boston (which still exist as the New England Seafarers Mission).  My father lived at the Sailor’s Home when he went to college, and when he graduated during the depression from Tufts, he sailed on a Norwegian tramp steamer.   I grew up fascinated with my father’s artifacts, stories and songs of the sea.

My interest in all things nautical evolved early in my high school days into a desire to go to the Coast Guard Academy.   If you read Judy’s Five Questions interview, you know that we met in pre-school and started dating (and competing) in high school.  My family belonged to the Congregational Church, Judy’s family was Catholic…for us that meant we belonged to two youth groups and had double the activities.  Both our families encouraged us to develop our own beliefs.   By the end of high school I was ready to head off to New London to start a career in the Coast Guard, and I was pretty sure that I wanted to share this life with Judy.

Judy and I were married at the Coast Guard Academy chapel two weeks after graduation in 1964 and set out for my first tour of duty on the Coast Guard Cutter Ingham in Norfolk, VA.  (Note—the Ingham is now a museum in Key West Florida!).  Norfolk was a segregated Southern City in 1964 prior to the Civil Rights Act.  It was quite a cultural change from the small town in Massachusetts!

The first years were challenging, as an isolated duty assignment followed my sea duty. I was home for only three months during our first three years of marriage. I spent 22 years as a Coast Guard officer, serving in 10 duty assignments and retiring in 1986.  Among the highlights were sailing on the Coast Guard’s tall ship, the Eagle as a cadet and as an officer, and serving as regional commander for the Long Island Sound region and ports.

By 1986, however, it was time to stay in one place (Northern Virginia) where Judy could pursue her career, our two daughters, Kristen and Ingrid, could stay in one school system for high school, and I could try something new.   Fortunately, the Coast Guard had provided me with the opportunity to obtain the graduate degrees and teaching experience (I spent three years on the faculty at the CG Academy) needed to pursue a second career in academia after I “retired”.  I became a faculty member at The George Washington University, where I was a Professor of Engineering Management and Systems Engineering and co-founder and co-director of the GW Institute for Crisis, Disaster, and Risk Management.   Our research programs attracted students and visiting faculty from around the world, resulting in an unanticipated, enriching cultural experience.  I retired for the second time in 2008, becoming a Professor Emeritus at GW.  It didn’t stick.  I joined Virginia Tech’s new Northern Virginia Research Center on a part-time basis to help VT create a research institute for urban and regional resilience.   I finally retired from paid work in 2014, but thanks to UUFE and Talbot Interfaith Shelter, I have not been bored!

Judy has already described our 60th birthday denial trek in Nepal in her Five Big Questions response, and I will agree it was our most remarkable adventure.  I have to think the most remarkable thing for me, since it was so totally unexpected and unplanned, has been the relationship I have built with my grandson, Davis.

I am a baseball nut; Davis fell in love with baseball as soon as he started T-ball and wants to know everything about the sport—he even likes Grandpa Jack’s stories of baseball in the golden age of the 1950s.  Each year he and I take a trip with a mid-western baseball tour company.  No parents, just us creating our own shared experience.  We started when he was eight on a short 4-day trip and have taken 6 trips in 6 years.  This summer he was 14, and we traveled 3000 miles by bus to see 10 games in 10 cities over 2 weeks.   When we started, I was taking care of him.  Now, he is taking care of me.  We both treasure the special relationship we have built.

What’s the next big thing for you?

The next big thing for me was determined in September 2014 when I was diagnosed with Parkinson’s disease.  Like it or not, I am now a “Parky” and what I can and cannot do will be influenced and eventually determined by this quirky movement disorder.  I have decided to embrace the disease as part of who I am, and to fight the progressive degeneration that is occurring.

Fortunately, there is a lot you can do to slow Parkinson’s progression—exercise, yoga, dancing, singing, physical therapy, speech therapy, thinking, challenging yourself.  I am doing them all.  The trick is being able to both deny that the disease is gaining and to be vigilant to changes so you can compensate.  It turns out that the Swedish stubbornness imparted to me as part of my cultural heritage is very useful for a Parky.

As Sachel Paige said, “Don’t look back, somethin’ might be gainin’ on ya.”  The time to do the things we want to do (like riding camels around the Pyramids!) and have put off for one reason or another is now.  I am getting as involved as I possibly can with the Johns Hopkins Movement Disorder Center.  I’ve joined a new Parkinsonics Chorale sponsored by the Maryland Association of Parkinson’s Support (MAPS) and Johns Hopkins, and joined the MAPS Board of Directors. 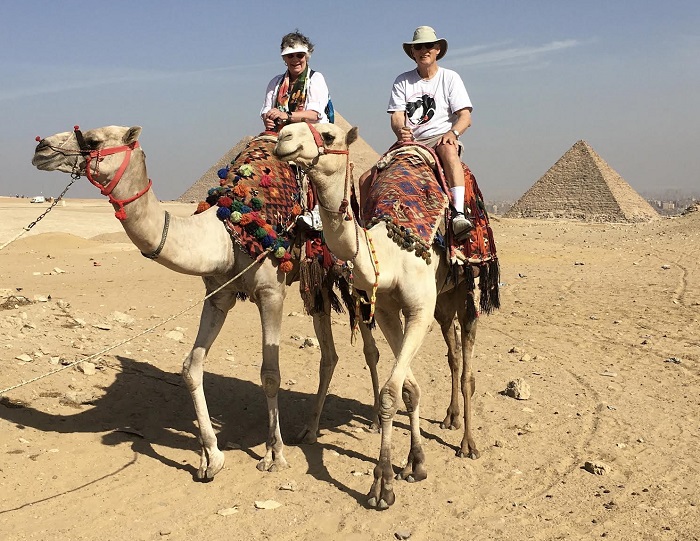 As I stated earlier, Judy was raised a Catholic, I was raised in the Congregational (now UCC) church.  I was very active in the Coast Guard Academy choir and interfaith chapel program, finding that the choir provided a much needed refuge from the stress and tempo of the Academy.  As we moved around, we found that joining a church provided us with a link to the community, close friends that were not in the Coast Guard, a refuge for our children, an understanding of the issues and problems of our community, and opportunities for community service.

Doctrine was less important than an active spiritual, liberal community with a commitment to social outreach.   At various times we were Methodists, Lutherans, or Presbyterians.  We belonged to Western Presbyterian Church in Washington before we moved to Claiborne.  Western is the home of Miriam’s Kitchen, serving the homeless in our nation’s capital.  Our experience with Miriam’s and with Calvary Women’s shelter in Washington led to my initial interest in TIS.   We knew it would be a tough community to replace when we moved to the Shore, and we quickly narrowed our choices down to UUFE and Third Haven.  UUFE has a choir, so it had my vote!   We are blessed to live in Claiborne, a caring community, and to be members of the spiritual community at UUFE.

How do you serve the UUFE, and why?

Starting with the why—I believe that I have reached the stage in life when I have the ability,  time, and resources to partially compensate for the support, help, and guidance I have received throughout my life.   Help and support have always been there when I needed it—from family, friends, the church, professionals, and colleagues.  I also realize that I need to continue to exercise my cognitive abilities and challenge my physical limitations (see discussion of Parkinson’s above).  Finally, I realize that the institutions we value—the Fellowship, Talbot Interfaith Shelter, Our Village Association, and others cannot exist without the generosity and contributions of donors and volunteers.

I have served on the UUFE board, most recently as Vice President, sing in the choir, and am currently a member of the Social Justice Committee and Chair of the Leadership Development and Nomination Committee.  I am also on the Talbot County Emergency Services Advisory Committee and the Maryland Association of Parkinson’s Support.

My primary focus for the last four years has, however, been the Talbot Interfaith Shelter.  I joined the board four years ago and have been Board President for 2 ½ years.   During this period we have withstood legal challenges to buy Easton’s Promise and have created a unique and successful program to combat homelessness in Talbot County.

I am grateful for the opportunity to contribute to TIS and to UUFE.  As stated above, there are physical and emotional reasons for me to remain active.  Again, the biggest benefits of volunteering are the ones that surprise you.  I have learned and grown more during the last few years than I did in any other period of my life, including the years spent writing my dissertation.   As many have observed, you start volunteering because you are motivated to be a giver, you continue because you are also a receiver.

5 responses to “When the Next Big Thing gets decided for you.”