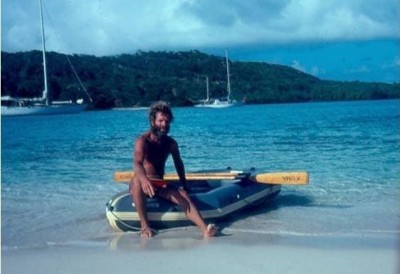 With mere mention of his epic 28,000-mile ocean voyage, UUFE’s Ken Court tells instead of growing up with Daddy and Mimi in tidewater Virginia, Hampton Roads, and Coronado, learning tobacco cultivation from McClain the black tenant farmer, raising delphiniums and a red Duroc sow, and designing submarines and tugboats. Tells with brevity.  And links to his three blogs of memoirs. 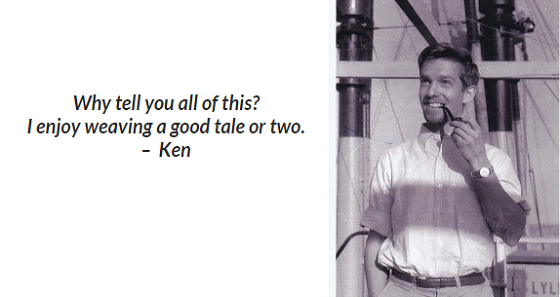 Ken:  I left Richmond at age 2 for Annapolis, after which we spent some time on Philadelphia’s Main Line.  For the most part I lived in rural Anne Arundel County, with time in California during WWII when we lived in San Francisco, and during the Korean War in Coronado. When I was 15, we moved to Gloucester County in Tidewater Virginia, because Daddy was SupShips at Newport News Shipbuilding & Drydock Company for the construction of USS Forrestal and Ranger.

In 1958 while I was in college at Webb Institute of Naval Architecture and Marine Engineering (Class of 1960), the family moved to Norfolk and then to Williamsburg, after Daddy retired about a year before I graduated.

We moved a lot since Daddy was a Naval Officer. I went to 11 schools in the course of my education through high school. The longest stint was at St. Andrew’s school in Delaware for the 10th through the 12th grade. The longest time in any house was 1946 – 1949 on a 350-acre tobacco farm in Anne Arundel County.

There I was taken under the wing of McClain Galloway, the black tenant farmer. Under Mac, I learned all the seasons and techniques of tobacco farming and dealing with farm animals.  As he told the young boy with him when I stopped by in 1963, “This is Ken who worked for me just as if for wages.” Mac and I remained in contact until he died in the late eighties. I was asked to speak at his funeral. I started with, “Mac was my hero.” After the service, two men came up to me on separate occasions, and asked if I was a preacher.

From the farm we moved to live on the water in a house we rented from fisherman. He would take me fishing on the pound nets on Saturdays. I had a 6 foot pram I bought for $12 of my own money. I also crabbed, and ran a trot line and sold crabs for $2 a bushel and soft crabs for 25 cents apiece. We had a 16 foot sailboat which I was allowed to take out on my own. That was my 6th grade year. The Korean War came on, Daddy went to Japan to repair ships, and we drove West to Coronado where I was in the 7th grade.

So I had lived on a farm and on the water.  In my case, Daddy saw I was good with my hands, gave me a set of woodworking tools in the 4th grade to nurture these skills, and when I was in the 8th & 9th grades, he got me a job as an apprentice to a master boat builder,  Cap’n Dick Hartge. Along the way I raised a red Duroc sow, worked in Gloucester, VA as a field hand raising delphiniums, and 2 years as gardener on White Marsh plantation –  2,000 acres that an ancestor once owned. Thomas Reade Rootes must be laughing in his grave. My, how the mighty have fallen.

My mother Mimi nurtured my sense of adventure; hard work. As did Daddy, he taught me to sail and encouraged me to become a Naval Architect.

As a Naval Architect and Marine Engineer. Once I finished Webb, I went to work at Pearl Harbor Naval Shipyard, working primarily with submarines, then small submersibles at Westinghouse for 12 years, where I was a supervisor. My last job was at Kaufman Design in Annapolis as co-owner for 19 years. We worked with yachts and commercial craft; I also did forensic engineering. My last 3 jobs were the design of a 45’ commercial tug for a man who had been my friend since the 3rd grade; the move of the Knapp’s Narrows bridge to the Chesapeake Bay Maritime Museum; and on Delaware’s tall ship, Kalmar Nyckel , we did some of the engineering design, and I ran the inclining experiment for the US Coast Guard.

Have you written elsewhere about that?

Yes.  Check out my blogs and slide show:

Living with Maggie Garey, writing my blogs & keeping in touch with my 2 girls & 2 grandchildren.

I was co-chair of the Social Justice Committee until July 2015. It felt good to raise money for social causes, meet those involved, and develop a rapport with the local community.

Enough said.  My New Year’s resolution is for brevity. An important goal.