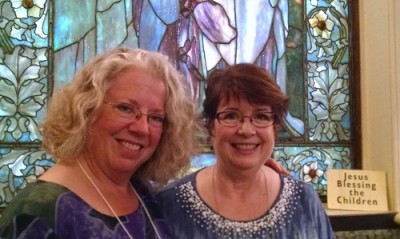 Music gives a soul to the universe. ~ Plato

Music gives a soul to us UUs as well, I might add, given my experience at the 2015 Unitarian Universalist Musicians Network (UUMN) Annual Conference.  This annual Boston-based event attracts not just UU music directors, but also UUs who love choral singing.  I am excited to bring back to my UUFE role the inspiration from a week full of learning, exchange of ideas, and daily services.

Most moving of all was the surprise farewell service at Sanctuary Boston led by the Reverend Mykal Slack , Director of Worship.  This Saturday night event at First Church Boston event featured the Rev. Slack, who was leaving the next day with his partner Lelaina Romero, to serve as Director of Congregational Life at the Unitarian Universalist Fellowship of Raleigh, North Carolina.

Sanctuary Boston usually draws a small, young, culturally and racially diverse crowd.  However, this time the gathering swelled until the place was overflowing with UU music directors, musicians, choristers, and teachers from all over the country, eager to sing and participate. The Boston Sanctuary regulars may have been overwhelmed by our sheer numbers and our joyous participation, while we were likewise overwhelmed by the beauty of the songs, the talent of the musicians, and the heartfelt messages from the minister and his partner on their last night in Boston.

This gathering full of spirit, singing, and love lifted my heart and soul. The two guitarists,  violinist, and  drummer–played and sang folk, rock, and “religious” music with talent and passion.  Drummer Matt Myer, playing and sitting on a box drum, was introduced as the new Sanctuary director.”  With lyrics projected on the wall, we sang a dozen songs.  The Rev. Mykal reminisced about his years at Boston First and his ministerial service to the Sanctuary Boston.  He recalled the Boston marches that blocked Boston highways in solidarity of the Ferguson tragedy, the numerous arrests, and the current court appearances of those who were now being asked to answer for their “crime” of taking a stand.  The Rev. Elizabeth Nguyen offered a moving homily about Black Lives Matter, Ferguson, and the song, Which Side Are You On?

I came away with a great sense of healing about what happened in Ferguson.  I feel proud that UU stands for justice and respect and healing–and great music.  I appreciate the UUFE support that made my participation possible.