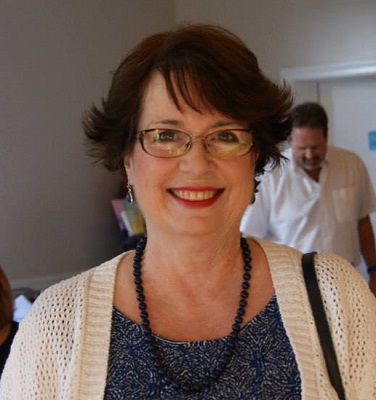 UUFE’s Maureen Curtin answers the Five Big Questions and tells how she made up bad stuff to feel truly Catholic, and about singing with the Swing Orchestra and comedians, and riding with the UUFE Rangers.  And yes, she was born with teeth.

Maureen:  I was raised in Silver Spring, MD.  It was a new community of brick houses that backed up to Sligo Creek Parkway built around 1946. Mom and Dad were one of the first families who moved in. Our neighbors, the Hoffmans, lived with Mom and Dad for a while until their house was ready. Within a short time, the houses were filled with couples who started having their families.  Consequently, there was a large group of children within a six year range ready to play!  We had enough for two football teams. Dieta Hoffman led one team (being German, he knew all the rules), and the other team was led by Jimmy Shannon who lived on the other side of my family.  Being Irish, he was good a sliding us past the rules set up by Dieta.  We had great times.

We had many clubs as well, although they normally last only two days, maybe a week.  This was due to the arguments over who would lead the clubs. My older sister Nancy, or Kathy, or Carol.  All the same age and all with strong personalities.

We were blessed to live by Sligo Creek and spent many hours jumping the creek, climbing trees, and making sure the creek was running clean. Our family was the first family to have a black and white TV, so lots of us piled in our living room to watch the Mickey Mouse Club Show.

I enjoyed school a great deal. I liked my teachers all through high school. In second grade, my voice was recognized, so that became an important part of my identity. Especially as  I had been held back in first grade because I was too young, having entered kindergarten when I was 4.5 and had trouble with reading.  By third grade I was a bookworm.

Most of the families in our neighborhood were raised Catholic, some attending Catholic School and others not.  There was a bit of rivalry between the parochial school attendees and the public school attendees.  We did attend religious class on Sundays following church. My cousins, Kathleen, Rita and Vickie, attended parochial schools (Vickie’s father raising Dalmatian puppies to afford that) and told the rest of us horrible stories about the Spanish Inquisition, tales of torture, just awful stuff.

The Catholic religion was scary to me.  I had to make up bad things I did so I could confess to the priest, and then I would go to bed terrified I’d commit a mortal sin before morning.  Listening to how violently all the saints died made me want to be a good person.  Certainly I misbehaved, but I really tried to be good! When I was in the sixth grade I did not understand why my friend, Sandra, wouldn’t go to heaven just because she, by chance, was not raised Catholic.  It didn’t make sense to me.

After graduating from University of Maryland, College Park, with a BS in Music Education, I moved to Boston and taught music at Braintree Junior High. I also sang with the Bo Winiker Swing Orchestra and was the opening vocal act for comedians performing at various lodges and hotels throughout New England.  After receiving a scholarship to the New York Academy of Theatrical Arts, I moved to NYC and studied acting for a year at the academy and then continued my studies and performing while working at restaurants to earn a living.  Eventually, I worked as administrative assistant at Good Shepherd Services, a group home for young girls about five blocks from where I lived. I worked there for almost 7 years and loved it.

After 13 years in New York, I moved back to Maryland to be closer to my family, as my dad was aging, ad my sister’s children were in high school, and I wanted to be nearer to them. I had a fascinating job with a paper company, Xpedex, and then studied Medical Transcription, which brought me to Easton Memorial Hospital and the Eastern Shore.

I was born with a tooth.  Actually, my cousin Vickie, the historian of our family, recently corrected me saying I was born with two teeth!!! Hard to top that.

I did write and direct a musical that was performed at Dorchester Center for the Arts a number of years ago, “Stairway to Heaven.”  While I used pop songs and songs from musicals, the storyline and dialogue were mine, and the show was very well received when we performed it.  Tim Wiegund from the Avalon filmed it, and it now plays from time to time on Easton Cable.

House repairs! (Ugh) I will be working full time at For All Seasons, which is our local mental health and rape crisis center. And once house repairs on done, I hope to be more active in our community theatre and my own shows.

Sadly, I will be leaving UUFE as Music Director  at the end of March, a job that has brought me much joy. UUFE is a wonderful community to be a part of, and I dearly appreciate the extraordinary members of my choir and the accompanists who have worked with us.

I have loved being Music Director, but also delivered lunches through the Social Justice committee organized by Mary Young.  A very fulfilling and fun morning once a month.  I have enjoyed being one of the TIS volunteers at the lovely new shelter. And also proud to be named as a UUFE Ranger along with Gayle Scroggs by Don Barker after we spent an afternoon cutting back and clearing out the woodland path behind UUFE.  We celebrated with hot dogs cooked over an open fire at dusk.

2 responses to “Born With Teeth”