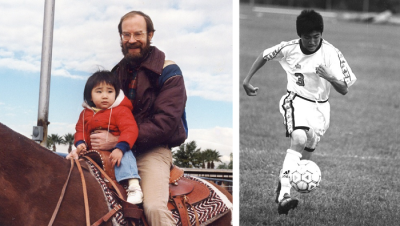 UUFE’s David Stevens meditates on the Five Big Questions and his art in wood and glass, kids and grandkids, and the secrets of home selling.

David:  I grew up in Kalamazoo, Michigan. My mother regularly attended the Presbyterian Church, and I went to Sunday school then church into high school. After that, I had no affiliation with a church.  I attended the U. Of Michigan, Ann Arbor, and majored in Southeast Asian History. The Vietnam War had a lot to do with that.

After graduation, I started painting and drove a taxi in Ann Arbor for income. After about a year, I moved to California, living in Venice, part of Los Angeles, for nine years. There I learned to work in stained  glass and did so for those nine years. In the mid 70’s I also started doing woodworking, making some furniture, and started to do wood and stained glass sculptures. I had no religious affiliations while living there.

I moved to Easton in 1980 and got married. In the mid 80’s, we adopted two Korean children who were both three months old when they came into our family. They are now 29 and 31 and the oldest, Elizabeth, has a one year old now.  Elizabeth and my son, Mark, both live in Baltimore.

Janet, my wife at that time, and I decided that some ties to religion would be good for the children, so we chose the small Unitarian Universalist Fellowship, which at that time was meeting at the Women’s Historical Society building. Elizabeth and Lane Earnest were the first two children in UUFE RE.  I have been part of UUFE ever since, though with limited participation for a couple years after our divorce in 1999.

I have continued to make my living doing some form of art since 1971. First stained glass, then sculptural work with stained glass and wood, then with wood alone. I made furniture and sulptures with wood up to the late 90’s. After two years working in a cabinet shop (97-99), I left woodworking to do photography. I did landscape photography, selling in galleries and weekend art festivals. After a few years, I started doing weddings also. With the recession and digital photography, it became harder to make a living as a photographer so I got a real estate license, which I have been working in for five years.

The last two years I have gotten back into woodworking. Recently my work has been accepted to be shown at the South Street Gallery in Easton. You can also see more of my work at TheTaoOfWood.com. Older work in photography and stained glass can be seen at HorizonPhotography.com.

I decided on real estate, since it has such a low threshold for starting out. I took the obligatory real estate courses online and passed the test in about two months. After five years in the business, I bring an attitude of wonder as to how this industry continues to command such returns for the level of expertise and time that is involved in selling a house. Having worked in art forms that demand a lot of skill and artistic development with very meager levels of income, real estate is just about 180 degrees the opposite.

The thing that is demanding in real estate is that there are so many realtors – about 400 in the Mid-Shore. So the challenge is getting clients. The money that realtors spend on advertising and retail offices is all about getting clients, not selling houses. Getting listings is what agents are after when they advertise themselves and the houses they have listed. Buyers find the house they will buy less than 1 percent of the time through such advertisements. The internet has made such advertising obsolete in terms of selling homes. Almost everyone starts their search for a house on the internet, and over 50 percent find the house they want to buy by looking through internet web sites. When working with buyers, I give them my recommendations, but they are also looking and ask to see houses they have found on the internet or by just driving around town.

Two things I think someone selling a house should consider when selling their house:  First, they are the employer in this situation. They are hiring someone to sell the house. They should tell the agent what they expect and what they are willing to pay as a commission. 2.5 percent is now the most common commission. The three most important things in a listing are pricing, presentation on the internet, and having the house ready to be sold. The seller should get a comparative market analysis from the agent for pricing the house, but especially for high end homes, they should have an independent appraisal.

The second thing is that the seller should hire someone they know or who comes with strong recommendations. You are paying a lot to an agent,, so why not benefit from someone you know and trust instead of someone who spends a lot advertising themselves? Most agents are trustworthy, but some are not. You only have to consider what was happening in the real estate bubble years to know that.

The most gratifying thing I have done in my life is raising my two children and seeing them develop as human beings. I feel that they have gone in directions that suit their abilities and interests with my support since they were little. My ties with them are the most important ones in my life.

Next, I think that having been able to do art for more than 40 years and produce work that is unique and expressive is quite an accomplishment. Culture is really what defines a civilization, and the art that is part of our lives has a positive impact that is there, if sometimes overlooked. Producing art that others have enjoyed is an addition to the lives of others without any real downside.

The next big thing is always the next design to work on. When one piece is done it is always – Well, what is next? What ideas do you have now? I feel the need to do work that is always different from what I have done before. Being in a rut of one style with 10’s of variations isn’t at all satisfying.

How do you serve UUFE, and why?

I have been on the Social Justice Committee now for more years than I can remember. As co-chairman and then chairman, I find involvement and leadership in this area is one that suits my interests. I have been interested in politics since the 60’s and feel the need to have my say about what is going on in the world.

I also like to come out for the yard clean up Saturdays.  And with my first stab at being a Lay Leader, I will consider doing that again when a topic inspires me.

2 responses to “On art, our kids’ lives, and our dwellings.”