Text and Sources of the Anthem performed by the UUFE Choir on Sunday Sep 30:

Give me a place to stand and I will move the world!

“There is,” said an Italian philosopher, “nothing more difficult to take in hand, more perilous to conduct, or more uncertain in its success than to take the lead in the introduction of a new order of things.”

Yet many of the world’s greatest moments, of thought and action, have flowed from the work of a single man.   A young monk began the Protestant Reformation, a young general extended an empire from Macedonia to the borders of the earth, and a young woman reclaimed the territory of France.   It was a young Italian explorer who discovered the New World, and the thirty-three-year-old Thomas Jefferson who proclaimed that all men are created equal.

“Give me a place to stand,” said Archimedes, “and I will move the world.”

Few will have the greatness to bend history itself,

But each of us can work to change a portion of events.

It is from numberless, diverse acts of courage and belief that        human history is made.

Each time a man stands up for an ideal,

or acts to improve the lot of others,

or strikes out against injustice,

he sends forth a tiny ripple of hope.

And crossing each other from a million different centers of

energy and daring, those ripples build a current which     can sweep down the mightiest of walls.

That is the source of all greatness in all societies, and it is the key to progress in our time.

Give me a place to stand.

The words of today’s anthem are taken from a speech given by Robert F. Kennedy on June 6, 1966 (two years to the day before his death) at the University of Cape Town.  He had been invited in the fall of 1965 to deliver this – the annual Day of Affirmation (of Academic and Human Freedom) Address – by Ian Robertson, president of the anti-Apartheid National Union of South African Students, who wanted a foreigner to speak to the topic.   Dr. King had been invited to deliver the 1965 Address, but the South African government refused his request for a visa.

Senator Kennedy’s five day trip to the country also included a visit to the home of Chief Albert Luthuli (the first African to be awarded the Nobel Peace Prize and then President of the African National Congress), who was unable to travel as he had been banned by the South African Minister of Justice under the Suppression of Communism Act.  Speaking from the roof of his car thereafter, Kennedy brought to Soweto residents the first news they had had in years from their exiled leader who, under the banning order, could be neither quoted nor photographed.

Alan Paton, author of Cry, the Beloved Country, wrote of the trip:

The Kennedy visit can only be described as a phenomenon. It was exhilarating to hear again that totalitarianism cannot be fought by totalitarianism, that independence of thought is not a curse, that security and self preservation are not the supreme goals of life, that to work for change is not a species of treachery… It was to feel part of the world again.

On his way to the University, Kennedy visited Ian Robertson at his apartment and presented him with a copy of Profiles in Courage, inscribed “with admiration” by Jacqueline Kennedy.  He then delivered the Day of Affirmation speech at a podium next to a symbolically empty chair.  Mr. Robertson was unable to attend as he had received his own banning order the previous month. 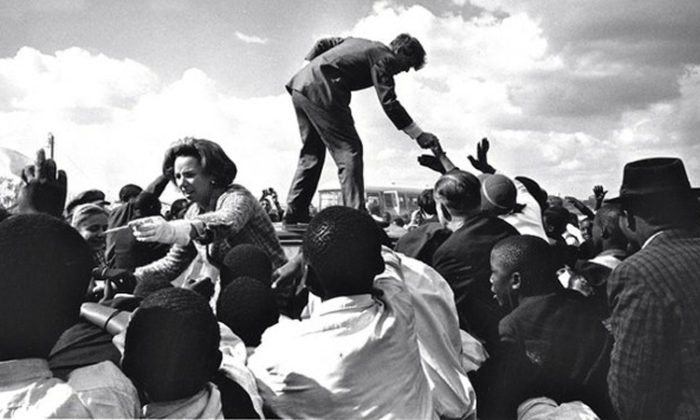