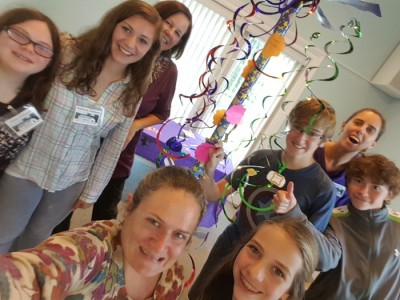 Years ago I became a middle and high school teacher. That is, I became certified to be a teacher, but I  have yet to fully cash in on the bachelor’s degree and teacher certificate, choosing instead jobs that require me to interact with young people in settings outside of the constrains of a classroom.  Overall, I’ve grown to understand that being with young people is as important to my happiness as is living within an hour’s drive to a beach.

Teens and tweens are a population that often unnerves adults. They can be moody and unforgiving, prone to drama and daring risks, and harshly independent. Like puppies, they grow in spurts, both physically and mentally. But behind the facade of angst or cunning or apathy, teens and tweens are usually energetic and easily excitable. Last Sunday we also discovered just how creative and thoughtful they can be, too.

Rev Sue, Lauren Harton, and I hosted our first Teen Church Gathering on Sunday. With a handful of teens and magic wands made of newspaper, we glittered up the Archer-Shee meeting room with ideas and thought about the kinds of magic that would improve our world. We talked about important superpowers we would adopt if given the leeway, and we listened to perspective about what makes something magical versus miraculous.

Teen Church Gathering is a new idea for our youth at UUFE. It contains similar, intentional elements that our regular Sunday service provides–some readings, a message, and the sharing of joys and concerns–but it is informal and tailored to the teens. Future Gatherings will include service projects and other hands on activities that are relevant and give teens a safe space to discuss their thoughts and concerns.

We have already learned that the true magic of our Teen Church Gathering is not in the superpowers we bring to the gathering, but the connections we make when we set aside the time to let that happen.

Maybe you have an idea that would be fun for our young people to explore. If so, drop me a line. Or check in if you, too, love the energy that comes from working growing minds and future citizens.