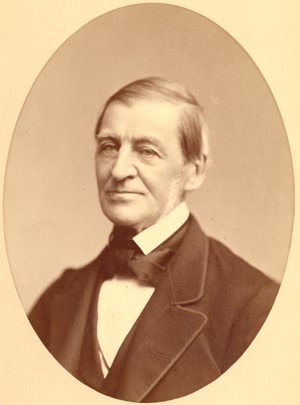 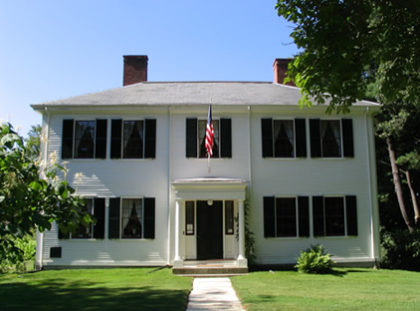 Write it on your heart at every day is the best day in the year.

Do not go where the path may lead, go instead where there is no path and leave a trail.

Did you recognize those quotations from Emerson?  You might have your own favorite Emersonians, but how much do you know about what “the sage of Concord” said about religion?

Even though Ralph Waldo Emerson was born over two centuries ago, his views seem more relevant now than then. In fact, he strikes me as the forerunner of what we hold most dear about our faith.

Emerson (1803-1882) often tops the list of revered historical Unitarian Universalists–but he resigned his Unitarian ministerial post over theological differences after a mere three years. A grieving widower, he chose to embark on a uniquely personal spiritual journey, wandering both far and wide.  He met with major European philosophers and immersed himself in eastern religions, returning quite transformed.

Once again in Concord, he remarried and established himself as a solid citizen, lecturer, and poet. When Harvard Divinity School invited their illustrious alumnus to address the 1938 graduates, they were stunned at his outpouring of heresies (albeit very poetically articulated).

Historical Christianity, he claimed, had turned Jesus into a demigod on the level with Osiris and Apollo. Rather than worshipping dead people, he advocated that we discover and affirm the Divine everywhere—in ourselves as well as in all of nature. This deep reverence for nature he shared with other Transcendentalists of his time, notably Henry David Thoreau and Margaret Fuller.

While Emerson’s heresies drew ire and fire from 19th century Christians, “the best commencement address in history” continues to awe thinkers and writers even unto this day.

“What makes his speech so extraordinary is that he extolls a sort of secular spirituality nearly two centuries before our contemporary conceptions of it,” wrote Maria Popova recently in her popular blog, Brainpickings.

Meanwhile, in Medium, Harry J. Stead observed that the speech was calling for a new approach to doing religion that empowers the individual:

Emerson offered a new direction, a new path that would help both the people and the church. He advocated a personal religious consciousness whereby each person would ignore the preacher and instead allow themselves to mature into a prophet.

Did Emerson Foreshadow the UU Principles and Sources?

The UU Principles, adopted 102 years after Emerson’s death, resonate uncannily with Emersonian precepts. Most notably, one UU principle affirms “a free and responsible search for truth and meaning.”  Dogma and catechisms are eschewed in favor of personal experience.  How Emersonian!

Furthermore, in our UU list of sources for our Living Tradition, we acknowledge the “direct experience of that transcending mystery and wonder, affirmed in all cultures, which moves us to a renewal of the spirit and an openness to the forces which create and uphold life.”  What better way to affirm Emerson’s declaration that all Nature is divine?

The heretic can now come home!

Emerson’s unabashed celebration of the Divine nature of all creation is echoed by those of us who want to awaken a reverence for nature. His emphasis on virtue and character foreshadow our own current preference for “deeds over creeds.”  He championed the alive-ness of the Divine and its ability to speak to us now–or as UUs say, “Revelation is not sealed.”

The more I dive into our Emersonian legacy, the more inspiration I discover for nurturing our souls and embracing our world with love and tenderness.

Might he also help us re-invent how we do church?  He did express a preference: “I like the silent church before the service begins, better than any preaching.”

What if Emerson popped into UUFE one Sunday morning?  Given how our denomination has evolved in ways eerily consistent with his beliefs, I suspect he might perk up when the sermon starts—and enjoy a good multilogue afterward!