Let’s pitch a show to Netflix, one designed to lessen racism and homophobia.  Maybe a documentary, complete with talking heads, statistics, and some up-close-and-personal stories. . . that only the choir would watch.  So stop the preaching already!

Fortunately Netflix already airs a show that moves people through mere tolerance to warm acceptance.  As a fan of makeover shows, I stumbled on it by pure accident and pray that it becomes a Trojan horse for teaching inclusivity and acceptance.

I’m talking about the new series Queer Eye, a take-off from Bravo’s Queer Eye for the Straight Guy.   As five gay guys make over a heterosexual “hero” (that’s their word), transforming the target’s personal styles, cooking, and home decor, I am riveted by scenes of love and respect in action. 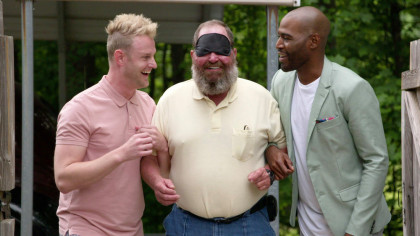 In the unexpectedly intense first episode, Kamaro Brown, the only African American, drives the “Fab Five” in their big black SUV to meet their new hero, Corey Waldrop.  On the outskirts of Atlanta, a white policeman pulls them over.  Tensions mount–only to dissipate the moment everyone realizes that Corey was nominated for the show by the highway officer, who then proudly offers them a sirened police escort to their destination.

Each of the Fab Five mentors Corey in turn with incredible openness, warmth, and tenderness, including touching–attention that is eagerly received. I think any of us would welcome the palpable kindness and generosity of spirit, not to mention the aesthetic advice, these guys offer.  They are role models for how to treat others as persons of worth and dignity!

As expected, by show’s end, our hero has been transformed into a great dresser who can whip up trendy appetizers and drinks for his appreciative wife, to be enjoyed in decluttered, updated surroundings.  That’s all well and good, of course, but that’s only the tip of the transformation in Episode One.

The more surprising change involves racist perceptions that evolve during conversations between Kamaro and Corey, who share heartfelt concerns about black-police relations.  After the interventions, both men acknowledge that they have become more accepting because of their interactions. You can’t script the tears in Corey’s eyes. .. nor the genuine affection they show for each other, developing a friendship that continues to this day.

As I see it, more hearts and minds change through warm interactions than through sermonizing or statistics.  And just maybe it can happen vicariously by watching shows like Queer Eye.

Finally, while we may never be on television, I’m heartened to remember that we can each choose to be one of the “fabs” and “heroes” in our own communities by awakening to the opportunities for one-to-one connection and sharing those stories.

One response to “Don’t Miss This Unexpectedly Transformative Netflix Series”