How do you respond when someone asks you this: “So you are a UU. What do you believe?”  Is your UU elevator speech fuzzy? Limited to what you have rejected? Can you clearly articulate your beliefs?

Several UUFE members and friends explored and defined their personal theology in a four-part weekly series in October and November, facilitated by UUFE’s Amanda Schaller. At our December 10 service on spiritual exploration, we joined Amanda and Rev. Sue, and heard from members of the “I Believe” seminar. 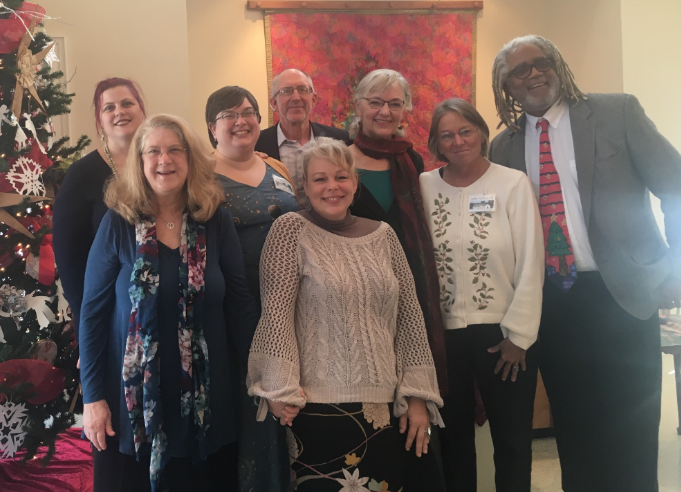 I should start by saying that I skipped class a lot.  I missed the first session because I followed Rita to Chicago, so that we could pinch hit with child care to help out our two sons and their spouses, and so that Rita could be there for Halloween with the grandkids.

Rita and I also enjoyed long talks by the lake in Madison with our third son.  His wife was away for a few weeks in California finishing her PhD.  They had been expecting their first child but had experienced a miscarriage a few weeks before.  Our talks by the lake helped us understand that more deeply.

Now, after our 4-week I BELIEVE course, I can hardly believe that I’m standing here before you to share my class assignment — my credo or belief statement.  Because I had once been a fundamentalist missionary, teaching Catholics in the world’s second most Catholic country, Colombia, that they should abandon their Nicene Creed and their Pope’s Creed and their Bishop’s Creed, and come join us.  We will teach you our creed, the Thirteen Articles of the Mormon Faith.

You see, I was a True Believer.  Until I wasn’t.  That happened back when our kids were about the same age as our grandkids are now.  No more catechisms or credos for me!  Until I realized that you have to believe in something to live and survive and thrive – and to die.

Now, my classmates are going to say:   “Look, he skipped class, and now he has to copy someone else’s homework and hand that in as his own.”   Yes, I’m going to read someone else’s credo and claim it as my own.   Here is the teaching of Shunryu Suzuki, a Soto Zen teacher in San Francisco in the 1970s.

“I have discovered that it is necessary, absolutely necessary, to believe in nothing. That is, we have to believe in something which has no form and no color — something which exists before all forms and colors appear, but which is always ready to take form and color. … Don’t feel lonely,” he wrote. “You exist just by yourself.  We must have this kind of spirit and then practice our way.”

So, how do I practice this Zen Way of believing in nothing?   Here is how:

“I believe in following a heavenly bodhisattva to Chicago, Madison, Baltimore, or Delaware –  wherever life takes us, to continue caring for the kids, and now the grandkids, and for each other, all the rest of my days.”  Amen.